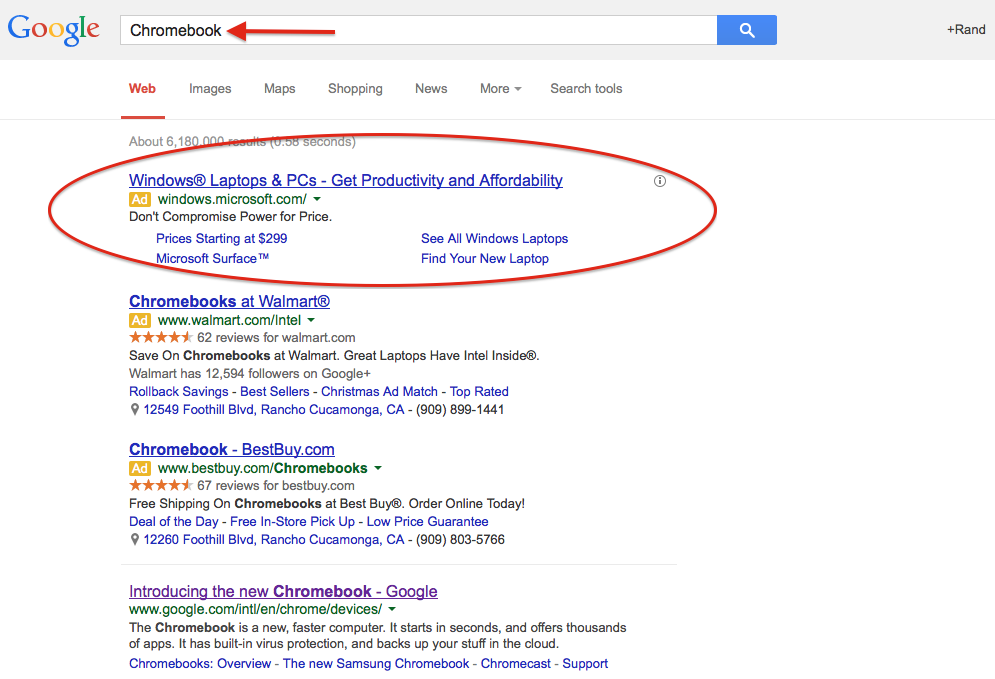 Microsoft appears to be running an ad campaign on Google AdWords, bidding on competitor terms, in this case, “Chromebook” which is a Google product. There’s no love lost between the two heavyweights, of course, but this is a bad strategy all around. Here’s why;

Secondly, the quality score algorithm. The page the user will be directed to won’t heavily feature the term, “Chromebook”. Unless Microsoft has gone completely nuts, that is. Nuts is possible, I guess.

Microsoft will be paying way over the price per click of their competitors because of the lack of relevance and low quality score.

Most importantly, the conversion rate (the percentage of people who actually buy something, having clicked) will be absolutely horrible. Terrible. The searcher has already decided they’re most likely to buy a Chromebook. Convincing them they should buy Microsoft is a very tough job at this stage. Imaging standing outside a Mercedes dealership trying to sell BMWs? I don’t envy that guy’s success rate much.

The resulting cost per conversion will probably be higher than the sale price of single unit.

It’s most likely a poke in the eye for Google rather than a marketing strategy, if someone at Microsoft is really that childish. But hey, I’ve seen/heard the ad campaigns, it’s possible.

It doesn’t work for Microsoft, the cost per conversion will be too high.

It doesn’t work for Google. The ad isn’t relevant. Google search is all about relevance.

It doesn’t work for the consumer. It isn’t what they’re searching for.

Speak with a Specialist
Learn AdWords with a Pro

Mark Tillison
Our fast-talking, snooker cue-wielding Managing Director, Mark Tillison is the founder of Tillison Consulting and the driving force behind its development and success.
Recent Posts

A Guide On Connecting AdWords to Webmaster ToolsGoogle AdWords Tips, How to Use Google Search Console